Tips For A Healthy Thanksgiving

Ahh thanksgiving, is there any holiday like it? The food, the football, the awkward family hugs. It’s a holiday that can be challenging for millions of Americans for a variety of reasons. The one we’re going to be addressing is the giant stuffed turkey in the room. Thanksgiving revolves around food and is daunting for healthy eaters, especially for those of us starting a diet. Is it possible to enjoy a holiday dedicated to stuffing yourself when you’re trying to shed pounds? Surprisingly, yes, but it’s no easy task. Here are a couple guidelines to get the ball rolling for those watching their weight at the day dinner this year. These health tips are a great start. 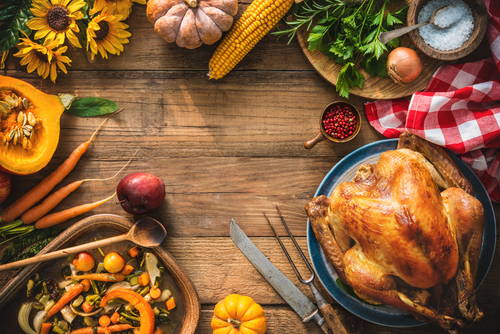 Thanksgiving isn’t really Thanksgiving without the signature flightless bird everybody eats. But, navigating a diet around turkey dinners stuffed with butter, carbs, and fats is tough. Before accepting your caloric fate, try mixing up this year’s dinner with new healthy Thanksgiving recipes.
Turkey isn’t unhealthy when prepared in a certain way. In fact, turkey is one of the healthiest meats there is. It’s low-fat, high in B12 and B6, and it’s tasty to boot. Satisfy that turkey craving by swapping out the traditional bird for a different recipe. Websites like EatingWell roll out dozens of healthy Thanksgiving recipes for those not wanting to sink into a food coma after this years big meal. Try visiting one or two of these sites and find a different way to enjoy your favorite food. Who knows, it might even be better!

Did you know? Americans eat about 46 million turkeys each Thanksgiving.

ave your appetite. Most men are supposed to eat around 3,000 calories, most women only 2,000. That’s not that much of a caloric budget to spend, especially factoring in the high carb and calorie count found in some of the Thanksgiving dishes. Having a healthy Thanksgiving doesn’t mean only having a healthy big meal, it means having a healthy rest of your day.
Skip the waffles, pancakes, or whatever unhealthy foods are usually munched on while watching the Macy’s Thanksgiving Day parade. Have an apple, wheat toast, yogurt, or any other low calorie alternative that will save your precious calories for later. If your Thanksgiving dishes are fatty, adding food on-top of them is a recipe for weight gain, sleepiness, and a pair of ripped jeans.

This is the real killer of diets: The Sides. Stuffing, mash potatoes, gravy, bread, it all adds up to one thing: a whole hunk of fat and carbs. These little indulgences combine their forces to create an unhealthy mishmash.
Of course, Thanksgiving isn’t the same without these sides. Instead of skipping them, reinvent them, similar to the turkey. Mashed sweet potatoes are a great substitute for the much less healthy normal ones. Avoid thick and carb loaded stuffing and instead try recipes that fit into a vegan diet, are vegetable heavy, and use healthier ingredients.

Don’t Watch the Big Game, Play it!
Football is as key a piece of the holiday as the food is. American’s love nothing more than eating a lot of food and falling asleep to announcer’s calling a football game. This year however, don’t watch the football game, go and play it.
Football is a killer exercise and an easy way to burn calories due to its aerobic activity focus. Pickup the old pigskin, turn off the TV, and chuck it around the backyard. A simple game of catch or two-hand touch could straight-up negate the fats and carbs from any meals you’ve eaten.

Dessert
Thanksgiving desserts are tricky. A warm slice of pumpkin pie resting in-front of you is undeniably tantalizing. Consider this thought, that slice of Pumpkin pie has around 300-400 calories. Not good but not terrible... until you add on the whipped cream (50 calories), the scoop of ice cream (150 calories), and of course whatever beverage you’re having with it (100 calories).
That’s 600 calories (conservatively speaking) total for a Thanksgiving dessert. You of course have to combine this with your meal from earlier, and the result is your diet has been blown wide open. The solution is quite simple: skipping the ice cream, whipped cream, and heavy beverage will knock everything down to around 300 calories, much better than 600. Thanksgiving dessert doesn't have to destroy your diet.

Get to know the difference between good and bad carbs.

On the most basic level, a carb blocker prevents certain carbs from being digested into your body. When the carbs pass right through, without being absorbed, your body usually doesn’t absorb these calories, helping you lose weight.*

Taking magnesium for a healthier life

Thanksgiving meals are supposed to be a celebration of being thankful for what you have, but lately they’ve been a bit more like black friday; a chaotic mess filled excess that leaves everyone involved exhausted. A return to a simpler and healthier Thanksgiving is a fantastic idea that will leave you satisfied and not passed out on the couch. Think about these tips before making your holiday plans and it should be smooth sailing. And for those of you that come up a bit short on your diet this Thanksgiving, don’t fret, there’s still plenty of time to get back on track and Codeage has all the supplies you need to do that. Wherever your health journey takes you, Codeage is there to help.